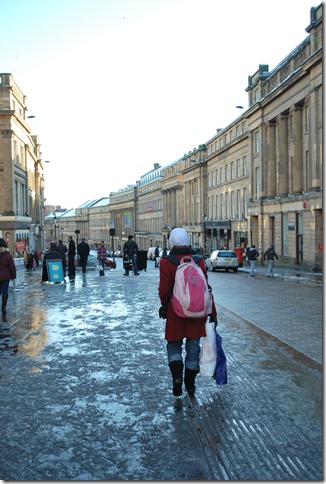 I once wrote that there was a girl that has a very sad eyes. Now I realise, my eyes never smile anymore. 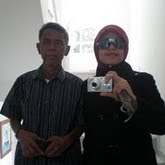 I lost my youthful look on the day that Dad died.
Posted by Nur at 15:43 No comments:

I believe, this was the second last trip before I went back home after knowing my dad was in the Stage 3.  I miss Dad so so much. Al-Fatihah. We went to Amsterdam together. How many of you who are able to bring your parents around the world? I'm such an ungrateful servant. Forgive me Ya Ghoffar.

p/s: I truly do not understand it that people say death is a normal business. Many Quranic verses state about parents, and if you do not love your parents, as far as I am concerned, you are doomed.

I was going to write about my fourth trip to Amsterdam, in which every trip is special. What brings me to this happening city this time? Anis and her children. She was my colleague, and I pay her a visit and bring her tat nenas - her special request from Malaysia. The Iraqi owner of the halal restaurant (in which I have my brunch there) thought I'm visiting a boyfriend. Romancing some Hollander, am I? Hello, I'm not in this game. Let the pictures tell you the story. Put in no particular order, and design for you to marvel at the wonderous God's creations. 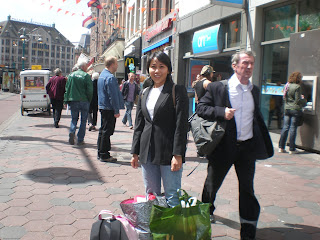 Anis, walah, with all the requested tat nenas and custard biscuits. She losses weight *sign with envy*, and we only meet for approximately one hour. I was contemplating to fly at first, of course, but given to the higher cost incurred and the possibility of ashes covering our sky again - I rather take the ship. Even though the sun is shining brightly, it is cold. Dont let the sun deceive you - ever. 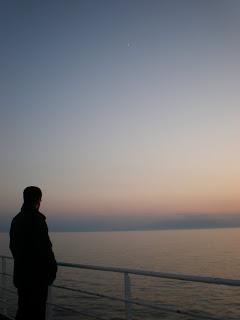 I love, love this picture. Originally, I want to take the photo of the crescent Moon, but the forlorn figure of this man, looking at the sun sets, prompt me to snap. He emits the aura of sadness, and it suits the mood of beautiful melancholy that is produced by the presence of twilight. 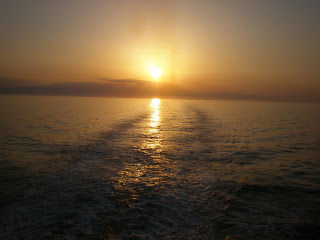 Isn't this photo glorious? I could never describe the feelings when I watch the nightfall. Let your imagination room unrestricted, and I leave it to you to soar above the sky, and feel free to feel anything, anything at all. 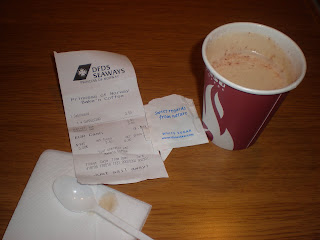 This is, without a doubt, the best capuccino I've ever drank. Seriously. I have my fair share of drinking capucino, mind you. A habit that I pick in recent years, blame it to my best friends back in UiTM. This coffee costs me 3.50 euro, but it worths every cent. My dad will love this coffee, he normally takes tea instead of coffee, as the caffeine will make him awake all night. And I watch the goals scored by the qualifying teams for the World Cup 2010. I need to finish the analysis by 11 June then. 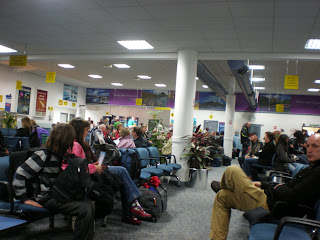 This is the situation in the port before we are allowed to board on the ship. Lots of people, Europeans, Hollanders themselves as well as the people from the UK. Owh I nearly forgot that I'm a foreigner myself. There are two Malay families, in which I have a pleasure to make acquaintance. And I see a Russian Team! They are wearing the red shirts, but I do not what event they are competing at. 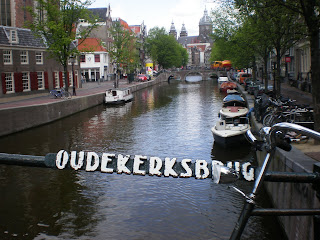 This is the prime reason why I keep coming back to Amsterdam. And I would really like to see the tulips, perhaps next year, by Allah's will. 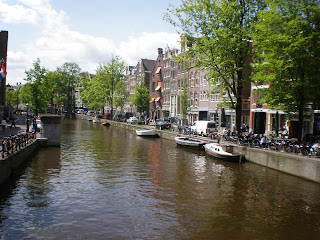 I love, love spring in Amsterdam. It's really gorgeous, and I'm drunk in its beauty. The canals, the architecture, the shopping materials, the people, the trams. Owh did I tell you that I was nearly run over by a tram? My beg was hit, and I nearly lost a balance, Alhamdulillah there was a fence that saved me where I cling to it with my life.


And guess what? Most people guess that I'm an Indonesian, or Phillipine! While I was waiting for Anis at the KFC, Ibu Tini who owns a restaurant bought me coffee and Zinger Burger. Yes, the KFC in Amsterdam is halal, given to the growing Muslim population. I was quite embarrased actually, I just had my lunch, it wasn't like I was a refugee in need of a good food. Alhamdulillah, it's a rezk, isn't it?

I missed Anis already, and them in Malaysia, and some of them in the UK. Aihh, penat plak nak tulis. Too many continents then.


Must dash!
Love, as always.