Salams,
I see the Northern Star. *hugs*. Where have you been in these past weeks, my dear?
1
There are a lot of things that need to be checked, and re-checked thoroughly, again and again. A tiring activity, but as it is my responsibility, I could never escape it. Sometimes I was thinking about leaving everything behind and boarding to Amsterdam. To look at the canals again, and to bury my face in the sweet scents of tulips. Or to go to Istanbul and kneel in prayer in the Blue Mosque, asking for repentance, mercy and guidance.
2
Owh I am happy if it was perceived as a motivated words, but I am far happier if it is accepted as a reality, and the truth. Aren't we such stuff as dreams are made on? Yes you are, yes you are indeed. Marvelously engineered by the Most Glorious.
3
I've cried a bucket when I read the below sentence:
What stands out the most in all of this is the lack of fear in Allah (swt) by this deranged man, and the complete and full trust in Allah (swt) by the Libyan people standing up to injustice. I was reminded of the story of the Battle of Badr where the Muslim army was unprepared and lacked in numbers against their enemy. In the end, the people who are on the side of Allah (swt) will, insyaAllah, prevail.
How could Ghadaffi kill his own people? It doesn't make sense, it doesn't make sense at all.
4
And I cry a thousand times over when I read the post about Nabi Muhammad saw by Cahaya Mukmin, the excerpt is:
Dia adalah rohnya malaikat dan tubuhnya manusia.
I doubt that I'll be in the same Jannah with him, after all, he'll be in the highest level of Jannah, while my fate is still unknown. But I will tray, I shall try, I must try my best to be among the ikhwan, after all, Allah swt has only asked our best, hasn't He?
5
the picture that has made my day! Owh I forgot which blog that I've snatched it from, forgive me Ma'am. I love the fat dove. The fat puyoh . The fat kitten. The fat chick. The fat duckling. Anything that is wholly and lovely and hug-able. 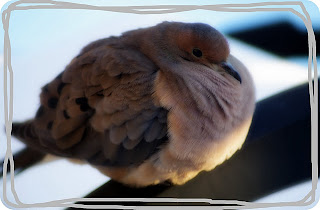